The British pair clocked a combined time of 2 minutes 12.38 seconds at the Swiss home of sliding sports.

The result was a sixth top-six spot in eight World Cup races for Hall, who won a silver with Gleeson in Sigulda and a silver and bronze with Greg Cackett in Sigulda and Igls.

Hall ended the World Cup campaign in fifth place in the overall rankings - just shy of a first-ever 2-man overall World Cup medal for a British men’s team since records began in the mid ‘80s.

Fellow Brits Lamin Deen and Sam Blanchet were 23rd on the day in a one-run time of 1 minute 7.05 seconds as Francesco Friedrich won gold ahead of Canada’s Justin Kripps and Friedrich’s German team-mate, Johannes Lochner. 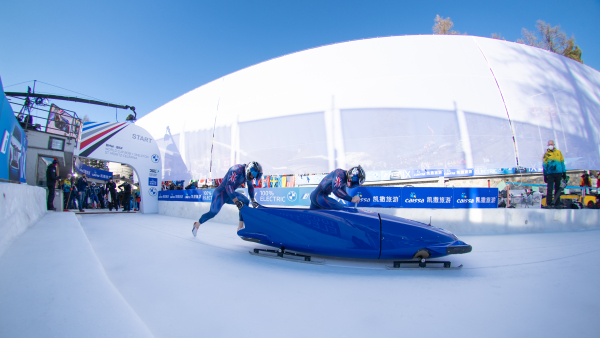 With the race also doubling as the European Championships, Hall and Gleeson claimed fifth and Deen and Blanchet 16th once all non-continental sleds had been removed from the World Cup results.

Friedrich’s seventh win in eight 2-man races saw the reigning Olympic Champion seal a fifth 2-man World Cup crown, with Kripps taking silver and Russia’s Rostislav Gaitukevich bronze. Lochner was the only other athlete to finish ahead of Hall in the standings.

Tomorrow sees the final day of World Cup action as the women’s and 4-man events conclude the campaign. Mica McNeill, Deen and Hall pilot GB sleds at 8am and mid-day GMT respectively.

The season then reaches its climax next month with the Olympic Winter Games in Beijing.