British Bobsleigh’s sensational start to 2022 got even better on Sunday afternoon as Brad Hall and Nick Gleeson won World Cup silver in Sigulda.

The medal came just a day after Hall did exactly the same with Greg Cackett and only a few hours after Mica McNeill and Adele Nicoll matched them in the women’s bobsleigh this morning.

No British squad has ever enjoyed such success across a World Cup weekend.

Hall and Gleeson clocked a combined time of 1 minute 39.22 seconds in Latvia to finish a huge half a second ahead of home favourite Oskars Kibermanis and just 0.06 seconds shy of race winner and 12-time World Champion, Francesco Friedrich.

Their start times were the third and fifth best and, just as he did with Cackett in the backseat yesterday, Hall drove impeccably to secure his team’s sixth medal of a remarkable season.

The 30-year-old from Crawley won bronze with Cackett in Igls in November and silver with him at the Olympic Test Event in Beijing in October and in Sigulda on Saturday, with Gleeson and Taylor Lawrence joining them for 4-man silver in both Igls and Winterberg.

“We wanted to be consistently challenging for medals this season and that’s exactly what we’re doing.

We feel like we can be in the mix every time we step on the start line and that’s great for our confidence ahead of the Olympics.

“Nick did a great job and responded with a faster start in Run 2 when we were close to the gold medal. That’s all you can ask for when you’re in that position.

“That’s two medals in two days with two different brakemen so that shows that we’ve got real strength across the team. Nick and Greg have been so close to each other in all the testing we do on and off the ice so it’s great to see Nick get his first 2-man medal.” 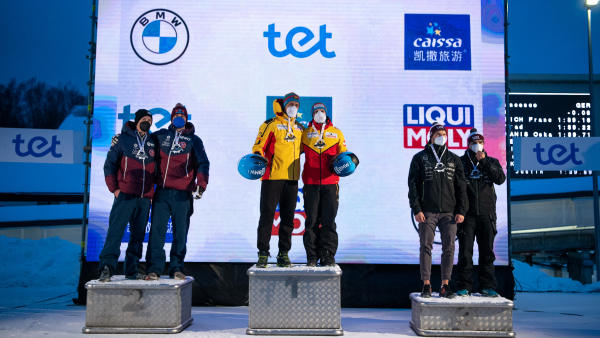 Today’s medal was the first of Gleeson’s 2-man career, with his previous World Cup best a fifth-place finish in Igls earlier this year and an equal fourth at the 2019 World Championships in Whistler.

“It feels good to get my first 2-man medal after coming close before,” added 25-year-old paratrooper Gleeson.

“I’d had success in the 4-man this season so it’s great to transfer that to the 2-man.

Credit to Brad - he’s driven brilliantly this weekend, just as he has all season. Greg gave him a strong platform yesterday and I did the same today and he brought it home like we know he can.

“This year is all about building momentum for the Olympics and we’re definitely doing that.”

Having ended 2021 in fifth spot in the 2-man world rankings, Hall has now closed the gap on those immediately above him with just two races of the circuit remaining.

No British driver has won an overall World Cup 2-man medal since records began in the mid-1980s but Hall is now just 10 points behind Germany’s Johannes Lochner in fourth and only 28 adrift of Canada’s Justin Kripps in third ahead of races seven and eight in Winterberg and St Moritz.

The showpiece event of the season is the Olympic Winter Games in just over a month’s time, with the bobsleigh action scheduled for February 13-20.