Hall and Cackett put a miserable run of bad luck to one side to record their most impressive 2-man result in 11 months as they clocked a combined time of 1 minute 39.89 seconds in Konigssee.

Having lost Sam Blanchet to a ruptured Achilles and Nick Gleeson to a hamstring tear on successive weekends in Winterberg and St Moritz, Hall and Cackett gave their team something to smile about as they produced two impressive start times and two consistent drives on a track where they finished sixth last season.

They were joint seventh fastest off the top in Run 1 in a time of 4.95 seconds and equal third quickest in Run 2 in 4.93 as they moved up from sixth at halfway thanks to the fourth fastest down time in the second lauf.

It marked the pair's best result since they finished fifth in Sigulda in February last year.

Fellow Brits Lamin Deen and Joel Fearon finished 21st, missing out on a second run by three hundredths of a second after registering a first run time of 50.53 seconds. 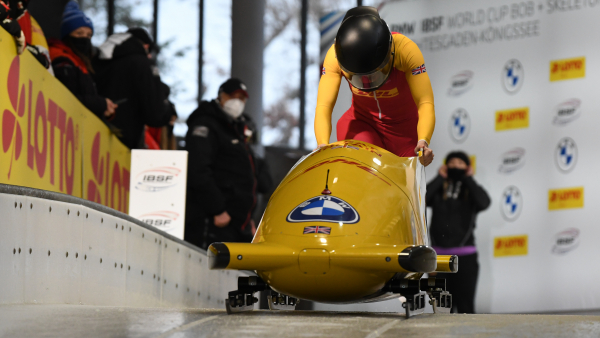 Mica McNeill was sixth in the solo event on Saturday

In the women’s monobob later in the afternoon, McNeill produced a superb second run drive to show her potential in an event that will make its Olympic debut in Beijing in February of next year.

McNeill was eighth at halfway in a time of 54.12 seconds but she went 33 hundredths quicker second time around as she clocked the fourth fastest run of the heat with a 53.79 downtime.

The result was an improvement of three places from her result in St Moritz last weekend and it equalled her career best showing in Konigssee from the 2-woman event in December 2019.