Laura Deas, Donna Creighton, Mica McNeil and Natalie DeRatt got the weekend's World Cup action underway on Friday, with the men set to follow suit on Saturday and Sunday.

Deas will end 2015 third in the skeleton IBSF World Rankings after finishing 10th in Friday’s final World Cup event of the year.

The former professional event rider, who won her maiden World Cup race in Altenberg in late November and was fourth in Winterberg last time out, was sixth after Run 1 but registered the 16th fastest time in Run 2.

Germany’s Tina Hermann backed up last weekend’s Winterberg win with another success as she beat the rest of the field by more than a second to extend her lead at the top of the standings.

Creighton came 15th after 11th and 14th placed finishes in Week 1 and Week 2 and she ends the calendar year 14th in the rankings ahead of January’s races in North America.

McNeil and DeRatt then marked their first appearance of the season on the World Cup bobsleigh circuit with a ninth-place finish after a fortnight on European Cup duty. 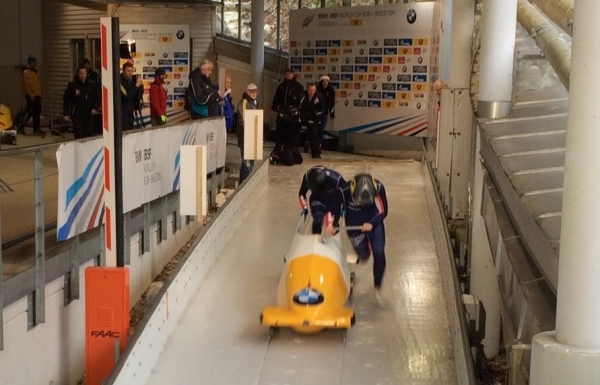 The Youth Olympics silver medalist and her new brakewoman were eighth after their first run in a time of 51.38 seconds before clocking 51.62 in Run 2 in a race won by Canada’s reigning Olympic Champion Kaillie Humphries.

The men take centre stage tomorrow, with Dom Parsons, Ed Smith and David Swift representing GB in skeleton from 9am GMT, before Bruce Tasker and Joel Fearon and Brad Hall and Ben Simons go in the 2-man bobsleigh from 12.30pm.