Reigning Champion Lizzy Yarnold gave her Olympic Winter Games preparation a big boost as she recorded her second-best result of the season with a fourth-place finish in Konigssee on Friday afternoon.

Yarnold, who won Olympic gold in Sochi four years ago, produced her best World Cup display since winning bronze in Lake Placid in November to show that she remains a genuine gold medal contender for next month’s Games in Pyeongchang.

The 29-year-old clocked a combined time of 1 minute 44.48 seconds at the track where she won World Championship bronze a year ago, finishing 18 hundredths of a second from a repeat of that feat in the final World Cup race of the season.

"I'm super happy with my fourth place," said Yarnold, who was ninth in Switzerland last time out.

It's been a mammoth team effort over many months and it's good to come in the top 10 in the overall World Cup rankings (Yarnold finished ninth).

"There's been many lows so I'm excited to finish the circuit on a high."

Today’s result came despite the disruption caused by the postponement of the race from 8am GMT to 1.45pm after heavy snow resulted in a huge disparity in down times.

With half the field already having completed their first run in the original morning session, the International Bobsleigh & Skeleton Federation jury opted to cancel the initial race and remove all times from the leaderboard, with each of the 25 sliders eventually starting afresh after the completion of the men’s competition.

Laura Deas, who was the only Brit to have completed a run in the morning’s cancelled competition, missed the cut second time around after clocking 53.63 seconds in her first run of the rescheduled race.

Deas was 23rd on the day but was still the highest placed British slider in the World Cup season rankings as she finished seventh overall.

Maddy Smith celebrated her 23rd birthday on race day but she had to be content with 21st position on her third World Cup race of the season.

Smith, who was 17th in Igls in December and 13th in St Moritz seven days ago, produced a top 10 start of 5.09 seconds before ending with an overall down time of 53.40 as she also missed out on a second run. 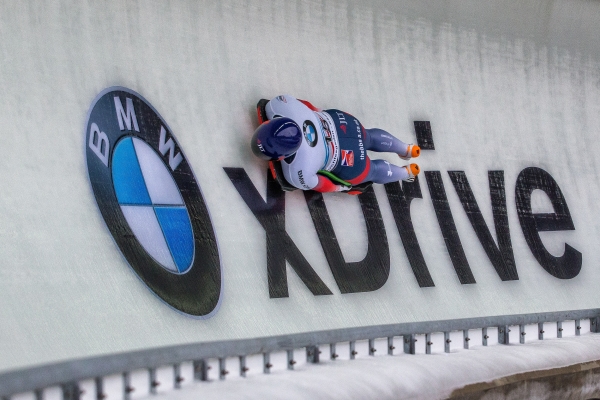 Lizzy Yarnold missed a medal by 0.18 seconds in Germany

In the men’s race, all three Brits made it through to a second run and all three improved dramatically second time around. Jerry Rice jumped from 20th to 14th and Marcus Wyatt moved from 17th at halfway to 12th at the end but it was Dom Parsons who made the biggest leap from one run to the next.

Parsons was 18th after his first heat but he held the lead for the longest stint of the session as he finished 11th – a result that saw the 30-year-old end the season 12th in the World Cup rankings.

Home favourite Axel Jungk pipped veteran Martins Dukurs to gold and there was more disappointment to follow for Dukurs as he was disqualified from last week’s race in St Moritz for a material violation.

As well promoting Parsons from joint fifth to equal fourth in Switzerland, Dukurs’ disqualification handed the overall World Cup crown to Sungbin Yun. The South Korean had won five of the previous seven races but had opted not to compete in Konigssee - a decision that had originally looked set to see him finish second in the overall standings for the third season running.