Marcus Wyatt led the way for GB for the second week running as he finished eighth in World Cup Skeleton competition in Lake Placid on Friday night.

Wyatt improved two spots on his 10th place position at the same track in the World Cup season opener five days ago as he clocked an overall time of 1 minute 47.49 seconds in New York State.

The 27-year-old, who was 12th at last season’s World Championships but sixth in the overall world rankings, was again among the fastest starters as he went sixth quickest and third fastest off the top in his two runs.

Olympic bonze medallist Dom Parsons finished 17th in his second race since the PyeongChang Games 22 months ago in a combined time of 1 minute 48.17 seconds.

Fellow Brit Craig Thompson placed 19th - an improvement of three places on last week’s showing when he just missed the cut for a second run.

Thompson’s starts were again a talking point as he went joint fastest in Run 1 with a 4.74 effort before going even quicker to be the outright fastest in Run 2 in 4.72 seconds.

In the women’s race, Madelaine Smith produced a fine display to finish 10th as she moved up nine spots from last Saturday’s opening World Cup race. 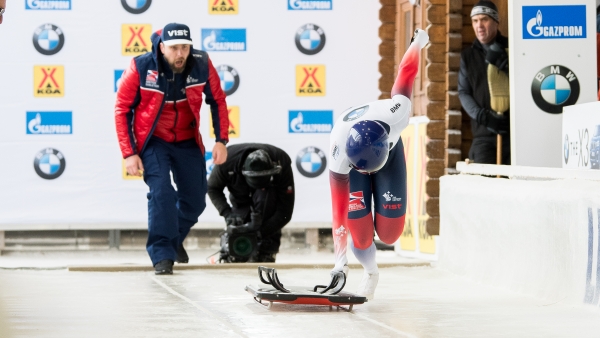 Madelaine Smith made the top ten this week

Smith recorded a time of 1 minute 51.83 seconds with the eighth quickest time in Run 1 and the 12th best in Run 2.

Kim Murray also improved on her position from last week as she moved up from 22nd to 19th with a time of 1.53.14 this time around.

Laura Deas couldn’t better her first race showing, though, finishing 21st and just missing the cut for a second run having been 10th in Placid first time around.

The World Cup season now takes a break until the New Year, with Race 3 taking place in Winterberg, Germany on Sunday, January 5.