Matt Weston made a major impression on his first appearance at the Skeleton World Championships as he finished the first day of competition 12th in the standings.

The 22-year-old from Sevenoaks only made his racing debut for Great Britain in December but he shone in Thursday’s first two heats at the showpiece event of the season.

Weston clocked a combined time of 1 minute 53.92 seconds in Altenberg, with his second run effort of 56.66 the 10th fastest of all 31 sliders.

The former taekwondo international only has a single World Cup appearance to his name after spending the season predominantly on the sport’s third tier circuit, the Europa Cup, but that lack of experience was far from evident as he finished the day above a whole host of World Cup regulars and Olympians.

Fellow Brit Marcus Wyatt is just two hundredths of a second behind him in 13th after registering times of 57.03 and 56.91 in his two runs in Germany.

Craig Thompson is also on course to secure the top 20 spot he needs at the end of Run 3 to make it through to the final heat tomorrow afternoon. The 27-year-old former footballer recorded the fastest start time in Run 1 and was third quickest off the top second time around on his way to finishing the day in 18th. 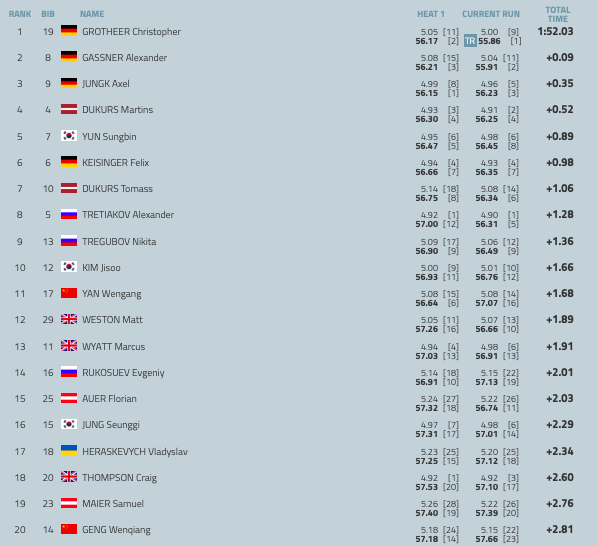 31 sleds completed two runs, with all three Brits in the top 20

Just as they did in the 2-man bobsleigh last week, German athletes dominate the top of the standings, with Christian Grotheer out in front from compatriots Alexander Gassner and Axel Jungk. While a German win would be far from a shock given the advantage associated with competing on home ice, it would be a major milestone for them as no German has won the men’s event since Andy Bohme 20 years ago.

Reigning World Champion Martins Dukurs, who hasn’t been beaten at the World Championships since 2013, sits fourth, half a second behind Grotheer, with Olympic Champion Sungbin Yun a further 0.37 seconds back in fifth.

Runs 3 and 4 take place tomorrow at 12pm, with the women’s event next on the ice at 8.30am GMT when Laura Deas, Kim Murray and Madelaine Smith go for GB.