The British Skeleton team for next week’s World Championships features an Olympic bronze medallist and a former taekwondo star in his first year of competition.

Laura Deas, who tasted Olympic glory in PyeongChang almost two years ago to the day, is the senior figure in the six-strong squad, while Matt Weston is the standout story thanks to a remarkable rise through the ranks this season.

Kim Murray, Madelaine Smith, Craig Thompson and Marcus Wyatt complete the squad for the final race of the campaign in Altenberg, Germany next Thursday, Friday and Saturday February 27, 28 and 29.

Weston only started competing for his country in December but has impressed in his limited time on ice to date and has now earned the opportunity to compete at the showpiece event of the season just two years out from the next Olympic Winter Games in Beijing. 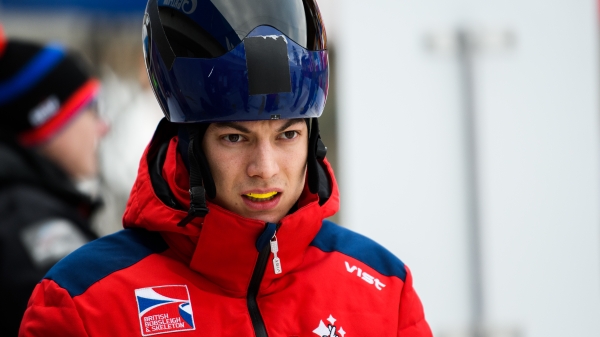 Matt Weston has impressed in his debut racing season

Marcus Wyatt, who ended the World Cup campaign ranked eighth in the world, leads the British challenge in the men’s event at what will be his second Championships. Wyatt only just missed a World Cup medal in Igls last month and the ex- American Footballer has been in the top eight 11 times in the last 14 races since the start of 2019.

Wyatt and Weston are joined by former footballer Thompson, with the 28-year-old having won four medals in nine days on the sport’s second tier circuit, the Intercontinental Cup, at the end of last month.

Thompson finished sixth in the recent World Cup race in Igls, while Murray was eighth in the same race in Austria and 10th in Sigulda last Sunday. Both will be competing in their first World Championships after narrowly missing selection for Whistler this time last year.

Smith makes her second appearance at the season’s climax and heads to Altenberg with a World Cup best of eighth this season in La Plagne five weeks ago.

“This is the biggest race of the season so it’s an exciting time for everyone here,” said Natalie Dunman, Performance Director for the British Skeleton team.

We’ve selected a strong squad, with a mix of youth and experience and we’re now looking forward to seeing what they can do in Altenberg.

“It’s always tough competing on a German track given how strong they are as a sliding nation but we’ve had success in Altenberg in the past so there’s no reason why we can’t achieve that again.

“We’ve made our selection with the aim of getting the best results possible in Altenberg but we’ve also got one eye on the next Olympic Winter Games in China. We’re halfway through the Olympic quad and two years out from the Beijing Games and the Worlds are another step towards our ultimate goal: winning medals at the next Olympics”.

The team depart for Germany on Friday, with official training scheduled to start early next week. The men’s race takes place on Thursday and Friday and the women’s follows suit on the Friday and Saturday.