The British pair took top spot by seventh tenths of a second in Germany to secure the country’s first EC women’s win for seven years.

For former British 100m record holder Douglas, victory came in just her third race in her new sport and just a fortnight after her first-ever run in a bobsleigh.

“That was a dominant performance and a real confidence building result for Mica ahead of this weekend’s World Junior Championships,” said GB Bobsleigh Performance Director, Gary Anderson.

“The win was set up by a great start performance from Montell, who is getting better and better with every race.

We knew Montell could be a real asset to the team when we brought her in during the summer but to see her progressing so swiftly is really pleasing - it’s further proof that our scouting system is working.

“Mica now has another race to focus on almost immediately with the World Junior Championships at the same track on Sunday and we’re looking for her to build on her fourth-place finish from last year’s World Juniors. She’ll be up against a tough field on a German track but she should go into it in high spirits.

“We’ve had some strong results in the women’s races this season, with two silvers and a bronze on the North American Cup circuit, but to be able to end the Europa Cup season with our best result to date is a big boost. If the girls can carry this form into the senior World Championships next month then we could be in for a strong result in Konigssee.” 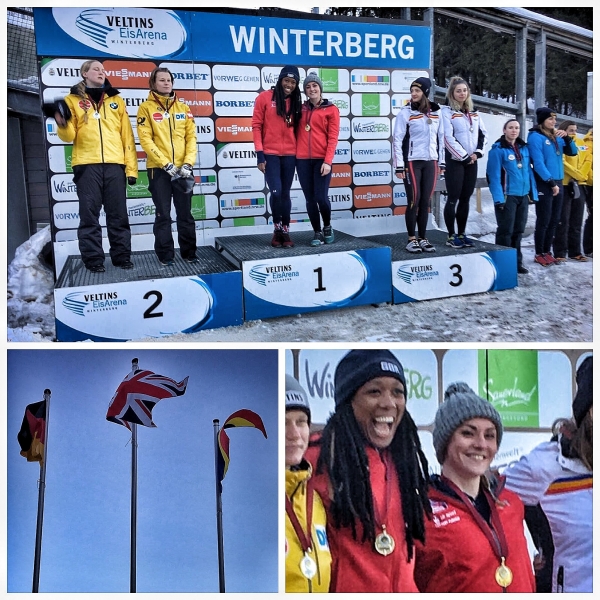 There were plenty of smiles from Mica and Montell in Winterberg

The World Junior Championships take place in Winterberg on Saturday and Sunday of this week, with the senior World Championships in Konigssee between February 17th and 26th.