McNeill and Moore, who competed for Wales at the 2014 Commonweath Games as a sprinter and only joined the GB Bobsleigh programme during the summer, took top spot by almost sixth tenths of a second across the two runs, beating a brace of German sleds to the title on a German track.

The pair only began competing together this winter but have now taken their medal tally to four, having already won a brace of silvers and a bronze on the North American Cup circuit in November.

Victory was the second in three days for the GB Women, after McNeill piloted former British 100m record holder, Montell Douglas, to Europa Cup gold at the same track on Thursday.

It was the country’s first World Junior win for GB in six years, with their last success coming when Paula Walker and Rebeka Wilson triumphed in Park City in February 2011. 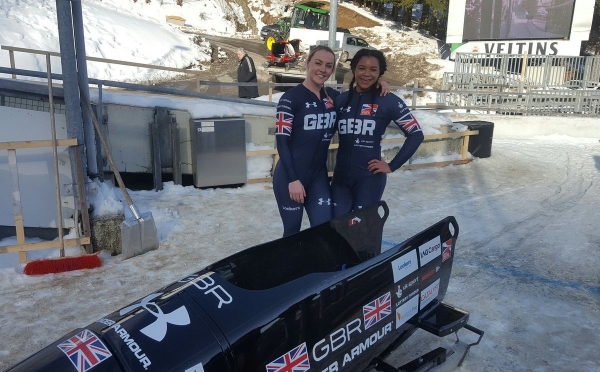 McNeill and Moore are the new Junior World Champions

“It’s a massive result for Great Britain Bobsleigh and the women’s programme and it’s one that these athletes should be very proud of,” said Lee Johnston, Lead Coach for GB Bobsleigh at the Junior World Championships.

“Both Micas performed when it really mattered and to beat the Germans in their own backyard is a real boost. That’s not easy to do but they produced two consistent runs, kept their cool under pressure and executed what they’d been practicing in training. They’ve worked very hard in preparation for this event this week and it’s great to see that hard work pay off.

“Having been with Mica (McNeill) from the start of her bobsleigh career prior to the 2012 Youth Olympics, it’s great to see her progressing like this. It’s been a great week for the women with Mica and Montell winning the Europa Cup race on Thursday and it should be a real confidence boost moving forward.”