GB so close to a medal

Great Britain missed out on a World Championship medal by the tiniest of margins in the Skeleton Team event on Sunday morning.

Madelaine Smith and Matt Weston finished just three hundredths of a second off a brilliant bronze in the brand new event in Altenberg on the final day of the competition.

World Champs debutant, Weston, who only made his first international appearance in December, and Smith, who is competing at just her second global championships, clocked a combined time of 1 minute 55.85 seconds in a race in which Germany once again took the title.

“It’s tough to take when you miss a medal by such a small margin. We were hanging in there & you do start thinking that it really could happen,” said Weston, who recorded the fastest individual time of all 30 sliders.

“It was still a strong performance, though, and we’re proud of that.

For me personally, a medal would have been the icing on the cake but it’s been a great first World Championships.

"I’ve loved every minute of it & I want to make sure I’m back again next year.” 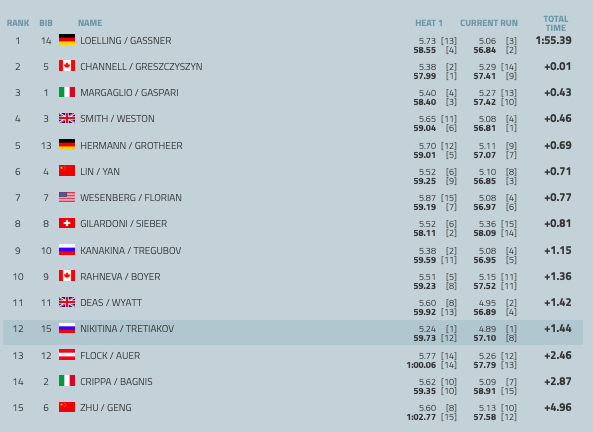 Weston & Smith were within touching distance of bronze

“A medal would have been amazing but that’s what this sport is all about - small margins. We came close and I thought it might be our day at one point but, unfortunately, it wasn’t to be,” added Smith, who was 21st in the individual competition after a disappointing first run left her facing an uphill struggle for the rest of the race.

“It’s still a strong end to the World Championships, though, & I’m pleased we’ve put in a good showing in the last race of the year.

Matt and I had so much fun out there. We really relaxed into it and tried to enjoy the occasion - there was a big crowd and lots of British support, and we loved that.

Fellow Brits Laura Deas and Marcus Wyatt finished ninth after clocking 1 minute 56.83 seconds. Wyatt, who was tenth in the men’s race on Friday, was the second fastest starter and the fourth fastest overall with times of 4.95 and 56.89.

There is now just one session left at this year’s World Championships - the final two heats of the 4-man Bobsleigh, featuring two British teams.