The showpiece event of the military sliding season saw all three services take home some silverware as GB athletes featured in the medals at another hugely successful competition in Konigssee.

The Royal Air Force dominated the skeleton events in Germany, with the Army and the Royal Navy / Royal Marines also getting in on the act in the bobsleigh competitions.

The annual event included a number of athletes who have competed for Great Britain this season and in previous years, with many of them getting amongst the medals at what was the final race of the season.

The Army’s double Olympian, Lamin Deen, won gold with fellow British team member Olly Butterworth in the 2-man bobsleigh just a couple of weeks after they competed at the IBSF World Championships together in Altenberg.

GB Development pilot Adam Baird and his brakeman, Taylor Lawrence, who represented GB as part of Brad Hall’s 4-man crew on the World Cup circuit this season, collected the silver medal for the Royal Navy. Jamaica’s Shanwayne Stephens claimed bronze for the RAF alongside James Benson.

The women’s bobsleigh was won by GB Development athletes Bex Andrews and Mel Haslam for the Royal Navy, with Sarah Smith of the Army marking her first season in British colours with silver alongside Zoe Beckett. Rachel Herod and Megan Walsh finished third for the RAF.

In the bobsleigh team events, the Royal Navy took top spot in the men’s competition and the RAF triumphed in the combined women’s standings. 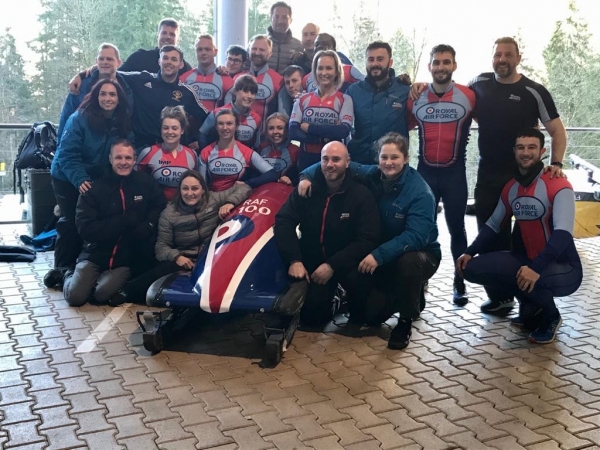 The RAF had some great results at the Inter Service Championships

The men’s skeleton saw a clean sweep of the podium places for the RAF as 2018 Olympian Rhys Thornbury took the title ahead of the BBSA’s own Benji Fulker, with former GB athlete David Swift winning bronze.

The women’s race was also won by the RAF courtesy of Lou Webb, with Aime Kirwen and Sian Lewis-Sammons of the Army and Royal Navy taking silver and bronze respectively.

The RAF completed a remarkable week for their sliders by making it four gold medals in four skeleton categories in all as they won both team events.