Brad Hall and Greg Cackett produced another superb World Cup performance in the 2-man bobsleigh as they finished fifth in Sigulda on Saturday.

Hall and Cackett missed a medal by just six hundredths of a second in a thrilling race in Latvia.

Sitting ninth at halfway, the British pair jumped four spots with a quicker second run as two of the teams ahead of them overturned in Run 2.

With the South Korean and then Swiss sleds crashing in quick succession, Hall and Cackett came within a whisker of adding to the World Cup silver they won in Igls last month as they made the wider podium for the top six sleds for the fourth time in five races this year.

They go again tomorrow in the final 2-man race of the World Cup season, with Sigulda hosting back-to-back 2-man competitions after Winterberg featured a 4-man double earlier in the season.

Hall and Cackett currently sit ninth in the world rankings despite sitting out the opening two races of the season in the United States of America. They were 10th before today’s race and are now within touching distance of the four sleds immediately above them. 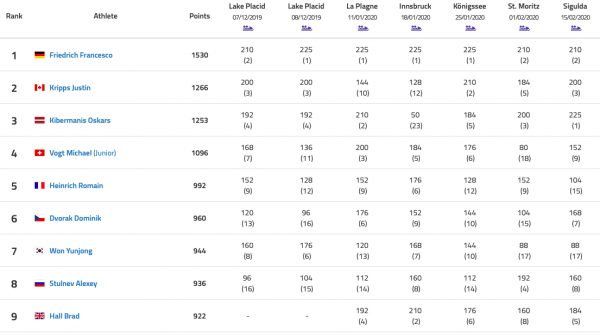 Canada’s Olympic Champion, Justin Kripps, won bronze, with Russia’s Rostislav Gaitiukevich the only other sled to finish above the Brits.

After tomorrow’s race, they head to Altenberg for the season-ending World Championships, with the 2-man race scheduled for next Saturday and Sunday and the 4-man following suit a week later.