Great Britain Bobsleigh are celebrating a second World Cup medal in as many weeks after Lamin Deen led his crew to 4-man silver in Whistler in the early hours of Sunday morning.

Deen set a new track record in his first run as he clocked 50.66 seconds off the back of the sixth best start time to lead at the halfway mark. The previous record had stood since the 2010 Olympic Winter Games but Deen and his team reached an incredible 97mph on their way to smashing the late Steven Holcomb’s previous best.

Hall and his crew of Nick Gleeson, Joel Fearon and Greg Cackett finished ninth to make it back-to-back top 10s for the two sleds just 24 hours after Mica McNeill and Mica Moore had claimed their best-ever World Cup result with a fifth-place finish in the Women’s race.

“I’ve been in this sport nearly 25 years and this weekend is right up there with anything I’ve experienced,” said GB Bobsleigh Head Coach, Lee Johnston. “It’s on a par with last week - and to have two weeks like in that succession is pretty special.

“In two days of racing in Whistler we’ve won a silver medal; broken a long-standing track record; had two sleds in the top 10 again; recorded our best Women’s result for nearly nine years; and seen Brad equal his best 2-man finish of his career. The level keeps lifting.

We’ve got a team of 19 people out here all pulling together and working hard for each other and that’s something that makes me very proud.

"One of our coaches, Petr Ramseidl, was working on the sleds until 2am and he was back in the garage at 6am today. That’s the kind of work ethic that everyone in the squad - athletes and staff - are showing week in, week out. We’re in a great place and the results are proving that.

“I said last week that one swallow doesn’t make a summer, but this is two now so summer’s getting a little closer!’ 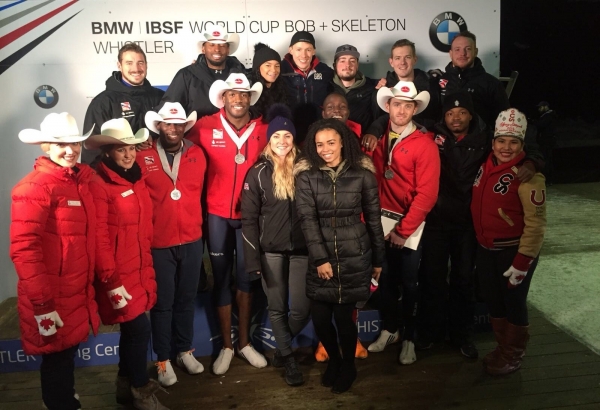 Deen’s silver was a first World Cup medal for the 36-year-old, whose previous best had been a fourth place in Placid in January 2016. It was also a first for all three of his crew and they played a major part in the success after clocking the second best start time with 4.74 seconds in Run 2.

Having won his maiden medal a week earlier, Hall ended Run 1 in eighth position in a time of 50.97 seconds despite starting from 16th in the 22-strong field. While most of those starting in similar positions found themselves unable to jump up the standings, the 27-year-old bucked the trend to get within six hundredths of a top five spot at halfway, thanks in part to the third best start time of the heat.

Despite having lost Bruce Tasker to injury prior to the start of the race, Hall’s team - which included a strong showing from debutant Nick Gleeson - clocked 51.55 seconds from the fifth best start time second time out as he secured his third 4-man top 10 in the last four races.

The results from Whistler mean Deen now finds himself fourth in the world rankings, with Hall in 11th spot after three of the scheduled eight races.