Deas so, close to Euro medal

Laura Deas came within a whisker of a European Championship medal in the final World Cup Skeleton race of the calendar year.

Deas finished sixth overall but was the fourth best-placed European in Igls, Austria, on Friday afternoon.

The 29-year-old missed out on European bronze by just one hundredth of a second as home favourite Janine Flock pipped her to the last of the medals.

World Champion Jacqueline Loelling was fourth overall and the second best European, with Flock finishing third ahead of Deas, who sits fifth in the world rankings with less than two months to go until the 2018 Olympic Winter Games in South Korea.

Reigning Olympic Champion Lizzy Yarnold was 16th for Great Britain, while World Cup debutant Maddy Smith produced an assured performance to finish just one place further back. 22-year-old Smith, who had won a hat-trick of North American Cup (NAC) medals since her GB debut in 2016, started 24th but jumped up to 16th at halfway, thanks in part to clocking the joint eight fastest start in Run 1.

In the Men’s race, Marcus Wyatt secured a top 10 finish on his World Cup debut as he mirrored Smith in taking his form from Intercontinental Cup (ICC) competition up to the top circuit. 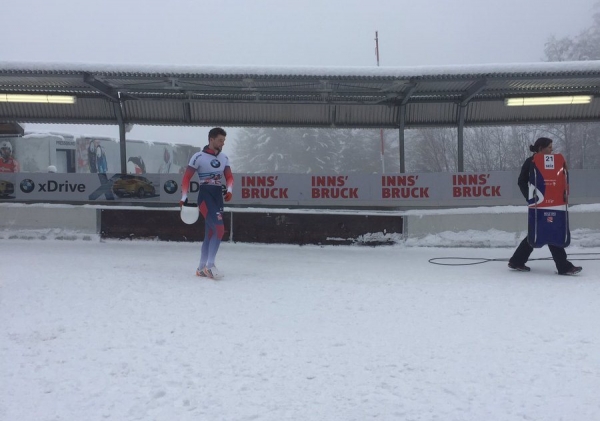 Wyatt, who won ICC silver in Calgary last month, finished in a time of 1 minute 47.43 seconds to secure seventh spot in the European Championships. The former American footballer only made his first competitive appearance for Great Britain in the NAC in February of 2016 but he finished ahead of a host of more experienced sliders in a 34-strong field.

Compatriot Jerry Rice recorded his best-ever World Cup finish as he placed 14th in the World Cup and 10th in the Euros. That PB came despite the fact that he had been handed a particularly tough start draw of 32nd and it ensures he heads into the Christmas break in high spirits.

Dom Parsons placed 18th overall and 11th in the European Championships but he remains the leading British male in both the World Cup and IBSF rankings in 12th and 13th spots respectively.