Amelia Coltman continued her dream start to her sliding career when she won Europa Cup gold in Germany on Saturday.

The 23-year-old won silver on her international debut in Winterberg last weekend before going one better in Konigssee earlier today.

Coltman, who only joined the British Skeleton programme in the summer of 2017, is in her first season of competing but still topped a 25-strong field by more than half a second as she saw off no fewer than four German sliders on their home ice.

“To win my first race of my career in my second ever competition was unbelievable,” said Coltman, from Melton Mowbray.

“I was so happy that I backed up last week’s silver and showed how consistent I can be.

And to win on a German track that involves a lot of driving skill has really boosted my confidence. I'm now really looking forward to tomorrow's third Europa Cup here in Königssee to see what I can achieve again.

“I've waited two years to start competing so to begin with a second place and a win is a dream come true!”

Coltman was quickest in each of her two runs in Bavaria as she clocked a combined time of 1 minute 46.21 seconds to beat Germany’s Josefa Schellmoser to top spot by an impressive 0.62 seconds.

Fellow Brit Rachel Hanagan was 10th on her international debut - a result that she says ‘surpassed all my expectations’.

Hannah Stevenson began the day hoping to build on last week’s gold medal in Race 1 but a crash during her first run ended those aspirations early on in the day.

In the men’s race, all three Brits made the top 20 to secure a second run – no mean feat given that there were a staggering 41 sliders in the initial field.

Laurence Bostock pipped Benji Fulker to the team’s best finish as they placed 13th and 14th respectively, with Matt Weston coming 19th after starting in the top three fastest times in both heats. 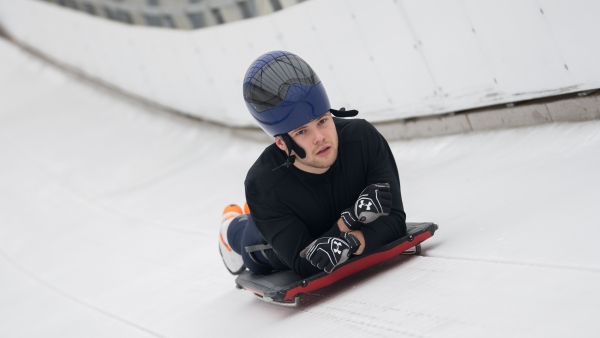 Laurence Bostock was the top Brit in the men's EC race

The Europa Cup racing continues at the same venue tomorrow as both the women and the men go again from 8am GMT.

Squire recorded an ICC PB with a sixth-place finish, while Rice went one better than his team-mate by placing fifth a week after winning bronze in Winterberg. Crowley also made the wider podium with sixth spot in the women’s race and Pittaway was on course for a similar result but wasn’t able to complete Run 2.

The ICC season now takes a break until the New Year when the circuit heads to Lake Placid in the United States for back-to-back races on January 23 and 24.