Best yet for Micas

The pair beat their previous best placing together of eighth set in both Whistler and Lake Placid last season, while McNeill bettered her previous highest results of seventh in Konigssee in 2016 and joint seventh in St Moritz in January of this year.

McNeill and Moore, who won Junior World Championship gold last season, sat third at the halfway mark after clocking 53.48 seconds off the back of a 5.25 start time on the fastest track on the circuit.

A second run time of 54.51 from a 5.30 start saw them miss out on the chance to hold on to the bronze medal position but it was good enough to ensure they gave Great Britain the country’s best women's result since Nicola Minichiello and Gillian Cooke finished third in Moritz in January 2009.

“To record their best World Cup result at the end of a tough training week and after a long time away from home is a huge boost.

It's the best British Women's result at World Cup level for more than eight years and it's a great way to end the North American leg of the tour.

“I know it will give them great confidence going into the week's break before Winterberg, which is the track where they won World Junior gold in January. It bodes well for the rest of the season.” 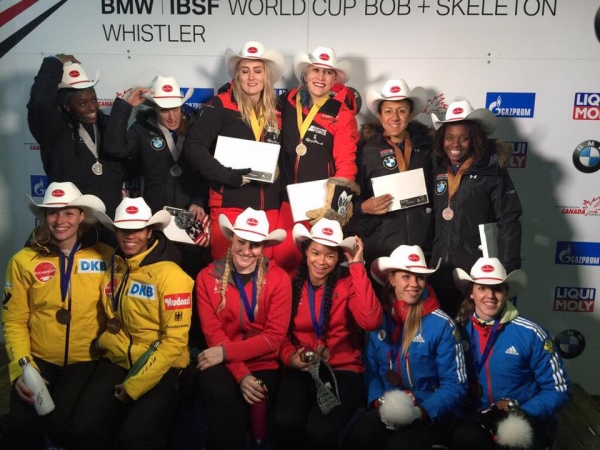 Mica McNeill and Mica Moore were joint fifth in Whistler

“I’m so happy with the result,” added Moore, who celebrated her 25th birthday on Thursday.

“To be able to improve our start time and position from last year is incredible.

“We’re so grateful for all the support the public have given us and for all the hard work and support from the coaching team and staff out here with us. Hopefully, we can continue to progress throughout the season.”

Fresh from last week’s 4-man medal in Park City, Hall and Fearon sat seventh at the halfway mark in Whistler after a run time of 52.09 seconds. They were slower in Run 2 but did enough to tie with reigning World Champion Francesco Friedrich in a race won by home favourite Chris Spring.

Bruce Tasker and World Cup debutant Nick Gleeson began promisingly with a 4.84 start but a crash derailed their challenge as they experienced the worst of the ice conditions having gone off 27th of 27 sleds.

The bobsleigh action returns with the 4-man competition at 10pm GMT tonight.