Marcus Wyatt led the way for British Skeleton as he finished seventh in the latest round of World Cup action in Switzerland.

Wyatt, who is in just his second season of top-level competition, backed up last week’s best-ever sixth spot in Igls with another impressive showing in St Moritz.

The 27-year-old just missed out on a wider podium position as he cemented seventh place in the overall World Cup rankings after six races.

Thomas, who, like Wyatt, just missed out on an Olympic spot to Rice and Dom Parsons 11 months ago, built on last week’s 15th in Igls as he continues to make progress on the path to the next Games in Beijing in 2022.

“I’ve got a lot to take from this result,” said Thomas, who was 10th at halfway at the spiritual home of sliding.

“Coming away from this special place with a World Cup PB is good, but I’m always hungry for more.

“I was disappointed to drop a few spots on the second run… but I know top 10s are only just around the corner for me.” 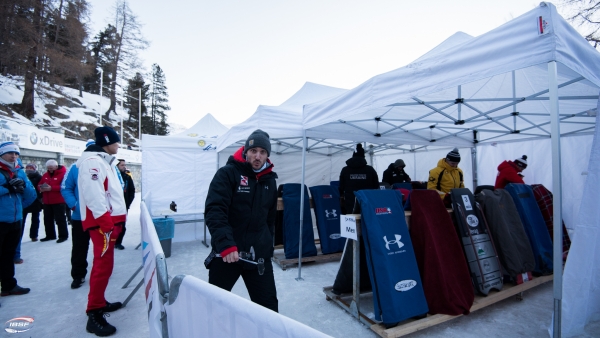 Jack Thomas went one better than last time out in Igls

Olympic Champion Sungbin Yun took his first gold of the season after two silvers and the same number of bronze medals, with Russian duo Alexander Tretiakov and Nikita Tregubov finishing second and third.

In the women’s race, Olympic bronze medallist Laura Deas was forced to withdraw prior to the start due to an illness that had restricted her to just three training runs all week. Deas was ‘completely gutted’ but admitted that her ‘priority is to be back to full strength for the North America leg of the tour’, which begins next month.

Madelaine Smith followed on from her personal best eighth in Igls with ninth spot in St Moritz – her second best result in eight World Cup appearances and four places better than on her last visit to Switzerland just over a year ago.

And, while Smith came close to a PB, Kim Murray recorded her own best yet with a fine joint 10th spot. The former long jumper beat her previous best of 13th (set in Sigulda in the opening World Cup race of the season) as she improved fully 10 spots from last week’s effort in Austria.

The next instalment of World Cup skeleton action comes in Lake Placid on November 15th and 16th. The circuit calendar concludes in Calgary a week later, before Whistler hosts the World Championships at the beginning of March.