Brad Hall and Greg Cackett made it two medals in as many days as they won World Cup silver in the 4-man bobsleigh in Igls alongside Nick Gleeson and Taylor Lawrence.

Having finished a fine third in the 2-man event at the same track on Saturday, Hall piloted his team to GB’s first 4-man medal in four years to make it one of the country’s best World Cup weekends in living memory.

Hall, Lawrence, Gleeson and Cackett clocked a combined time of 1 minute 41.57 seconds as they tied for second place with veteran German pilot Johannes Lochner - the crew that beat them to silver on Saturday.

Start times of 5.00 and 5.01 seconds were the second fastest of each run, giving Hall the platform to finish almost a quarter of a second clear of home favourite Benjamin Maier in fourth.

“It’s been a great weekend. We’ve done something that hasn’t been done for a very long time,” said Hall.

“We knew that we were capable of a result like this but it’s brilliant to put it together on race day and to make the podium for the first time together as a 4-man team.

The boys were brilliant today - just as they were in training all summer & all autumn. We had the second best start times in both runs & that gave us the platform to compete.

“We said yesterday that we want to be in the mix for medals in the build up to the Olympics & today we’ve shown everyone what we’re capable of in the 4-man.

“I’m incredibly proud of the boys and I hope we’ve done the nation proud, too.” 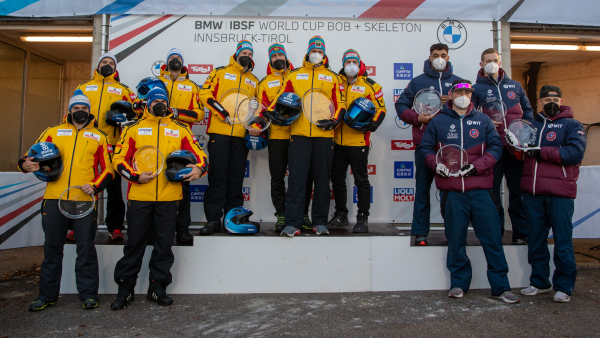 The medal was the third of the season for Hall and Cackett, who also won silver in the 2-man at the Olympic Test Event in Beijing last month, and a first of their careers for both Paratrooper Gleeson and Royal Marine Commando Lawrence.

Deen, Fearon, Olubi and Simons finished 21st in today’s race, missing out on a top-20 spot and a second run by seven hundredths of a second.

In the women’s race earlier in the day, Mica McNeill and Montell Douglas finished 16th in a time of 1 minute 47.34 seconds.

Next week’s racing also takes place in Igls, with men’s and women’s skeleton on Friday, women’s mono bob and 2-man set for Saturday and women’s and 4-man bobsleigh scheduled for Sunday.