McNeill teamed up with summer Olympian and former British 100m record holder Montell Douglas for the team’s first race of the new season.

They clocked a combined time of 1 minute 48.13 seconds, jumping up from tied fourth with home favourites Katrin Beierl and Jennifer Onasanya at halfway to finish above the Austrians and immediately outside the medal spots.

Only a trio of German pilots finished ahead of the Brits in the final standings, with Laura Nolte taking her second win of the season from Kim Kalicki and Olympic Champion Mariama Jamanka.

McNeill and Douglas had missed the opening two World Cup races in Sigulda after a positive Corona Virus test in the wider support group and had seen team-mate Victoria Williamson return home with injury prior to today’s competition but they registered top five start times in each run to get their season off to a strong start.

The result matched their previous personal best from Altenberg, Germany in January 2019, while a medal would have been the nation’s first female World Cup podium since Nicola Minichiello and Gillian Cooke took back-to-back bronze in St Moritz in January 2009.

McNeill, who was eighth with Mica Moore at the 2018 Olympic Winter Games in PyeongChang, also competed in the women’s monobob competition on Saturday, finishing fifth in just her third competitive race in that discipline.

In the weekend’s men’s races, Brad Hall secured a superb sixth spot on Sunday, 24 hours after finishing seventh in his season opener. 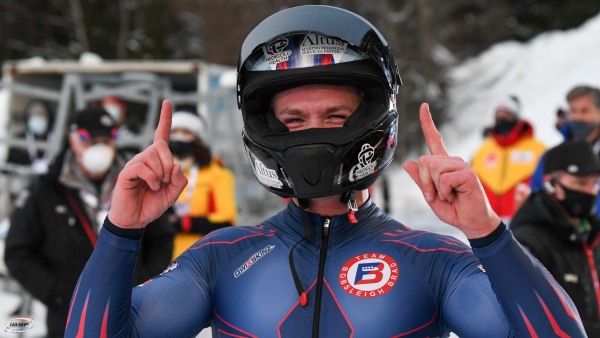 Brad Hall was understandably pleased with his start to the season

Hall teamed up with Nick Gleeson for the first time since they equalled GB’s best 2-man World Championship result with joint fourth in Whistler in March 2019 on Day 1 before joining forces with Greg Cackett, the man who pushed him to an historic silver medal in Igls just under a year ago.

Having missed the opening two races in Sigulda with an ankle injury, heavy snowfall during the week meant Hall and his brakemen had very few runs in the bag prior to the weekend’s racing but they were twice in the mix in a 21-strong field.

Cackett and Hall finished just 0.01 seconds from fifth and were only six hundredths from fourth on Sunday after Gleeson and Hall had missed sixth by just one hundredth on Saturday.

The Brits recorded the fourth best start times in both of Saturday’s heats and backed that up with the sixth and seventh quickest starts on Sunday.

James Dasaolu became arguably the fastest man to push a bobsleigh for any nation on the World Cup circuit as he made his top tier debut alongside Lamin Deen in the same race.

Dasaolu - who has competed at two Summer Olympics and clocked 9.91 seconds over 100m - and Deen - who is a 4-man specialist - finished 19th in both races as Johannes Lochner won gold on Saturday, before compatriot Francesco Friedrich took spot on Sunday.

The World Cup circuit remains in Igls for another week, with McNeill, Deen and Hall all set to compete again next weekend. The 4-man bobsleigh event hasn’t featured in Igls or Sigulda but it will be back on the cards in Winterberg after Christmas.