Brad Hall and Greg Cackett got 2022 off to a flying start as they won World Cup silver in Sigulda on Saturday.

Having led by one hundredth of a second at halfway, Hall and Cackett came within a whisker of the country’s first 2-man gold for 36 years before being pipped by Russia’s Rostislav Gaitiukevich in Run 2.

They clocked a combined time of 1 minute 39.33 seconds to finish 0.10 seconds behind the race winner and 0.07 clear of Austria’s Benjamin Maier, who took bronze.

The medal was the pair’s third 2-man podium of the season after bronze in Igls in November and silver at the Olympic Test event in Beijing in October.

And it was the team’s fifth overall when added to a brace of 4-man silvers alongside Nick Gleeson and Taylor Lawrence in Igls and Winterberg.

“It’s a great way to start the year,” said Hall.

We would have loved to win gold as we were so close but another silver is a really good result for us. It keeps the momentum going and it’s another boost ahead of Beijing.

“We had two strong pushes and the drives were the first and second best in each run so we know we’re in a good place.

“We’re at the business end of the season now and it’s all about knowing we can get to the Olympics with a realistic chance of coming home with a medal.” 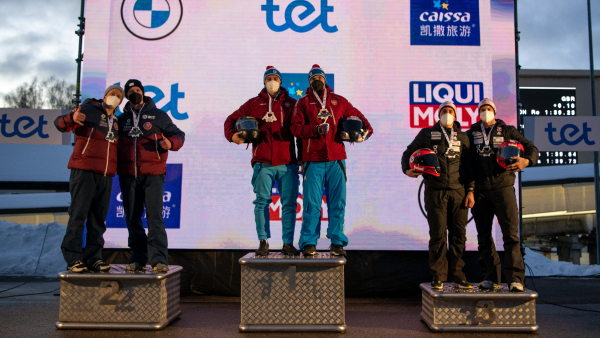 Hall and Cackett made the podium for fifth time this season

Prior to the start of this season, Hall and Cackett had won World Cup 2-man silver together in Igls in January 2020 and 4-man bronze with Joel Fearon in Park City in November 2017.

Germany’s reigning Olympic Champion and 12-time World Champion Francesco Friedrich finished down in 12th place as he suffered his first defeat in either 2-man or 4-man World Cup races since December 2020.

Sigulda is a double 2-man race weekend so Hall will go again alongside Gleeson at 11.30am GMT tomorrow.

Mica McNeill and Adele Nicoll race in the women’s event at 7am GMT.

The teams then head to Winterberg for Race 7, before the World Cup season concludes in St Moritz on the weekend of January 14-16.