Bronze at Junior World's for Pittaway

Ashleigh Pittaway won Junior World Championship (JWC) bronze for the second time in her career in Switzerland on Saturday.

The 2016 Youth Olympic Champion backed up her third-place finish from 2019 in Konigssee with another in St Moritz as British Skeleton’s strong season showed no sign of slowing down.

A day after Marcus Wyatt missed out on a third World Cup medal of the year for the team by just six hundredths of a second in Germany, Pittaway’s time of 2 minutes 22.83 seconds was only bettered by two Germans at the spiritual home of sliding.

Pittaway, who is still only 20-years-old, sat fifth after the first run of the U23 competition but a significantly quicker second lauf saw her jump into the podium places at the expense of Russian duo Anastasiia Tsyganova and Alina Tararychenkova.

Hannah Neise and Susanne Kreher took gold and silver 11 months after they both medalled in the same competition in Winterberg when Pittaway didn’t take part.

The medal was Pittaway’s 10th of her career, having already added four Intercontinental Cup and three Europa Cup podium places to her Olympic title and previous JWC bronze, and it comes two months after she set a World Cup PB of eighth in Sigulda in the second week of the season. 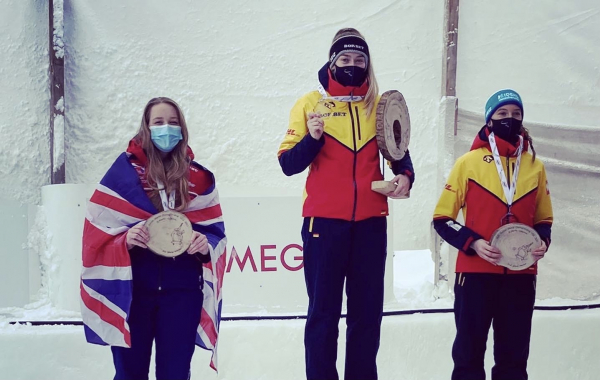 Ashleigh Pittaway made the podium in St Moritz

In the afternoon sliding session on Saturday, Laurence Bostock made the top ten, finishing tenth in 2 minutes 19.87 seconds.

Bostock was among the top five starters in each of his two runs as he improved significantly on his 16thplace in last year’s competition.

The 21-year-old, who became the country’s youngest male slider to feature on the World Cup circuit when he slid in St Moritz 12 months ago, is only in his second season of international racing and was competing against a number of vastly more experienced athletes.

The race was won by Russia’s Evgeniy Rukosuev, who was fourth in last week’s World Cup competition at the same track. A former Youth Olympic Champion, Rukosuev, made his senior international debut as far back as 2016 and already has nine Europa Cup medals to his name. Germany’s Felix Keisinger, who has four-time World Cup medal winner, claimed silver, with Austrian Sammy Maier - a World Cup regular with three top ten finishes this term - taking bronze.