Brad Hall, Nick Gleeson, Taylor Lawrence and Greg Cackett brought the curtain down on the sliding action at the Olympic Winter Games with a fine sixth-place finish in the 4-man bobsleigh in Beijing.

The British quartet comfortably maintained their overnight position from Saturday’s first two runs as they pulled away from the two Russian sleds directly behind them in the final two heats in the early hours of Sunday morning.

Hall and his team were unable to close the gap on the medal places, however, as they missed out on a podium place by 0.63 seconds after clocking a combined time of 3 minutes 55.72 seconds over all four runs.

The result was GB’s sixth best 4-man finish in Olympic history after a silver medal in 1924, bronze in 1936, 1998 and 2014 and fifth in 1994. It was also a huge improvement on Hall, Gleeson and Cackett’s previous Olympic 4-man showing in South Korea four years ago when they placed 17th alongside Joel Fearon in PyeongChang.

Saturday’s start times were the second fastest of each heat and they impressed again off the top on Sunday as they produced the best result of all British teams or athletes across the three sliding sports over the past two weeks. 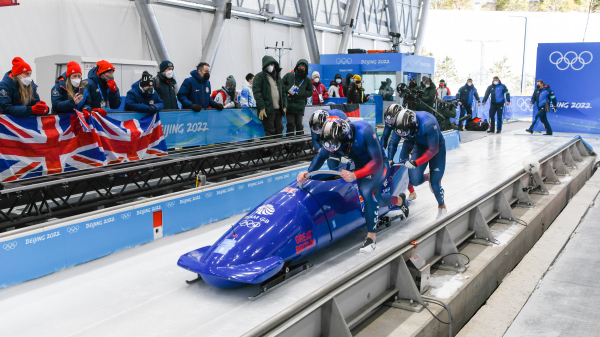 Hall, Gleeson, Lawrence and Cackett have enjoyed a sensational season

Germany continued their domination of sliding sports at these Games as Francesco Friedrich and his crew took gold ahead of compatriot Johannes Lochner, with only Canada’s Justin Kripps able to prevent the Germans from repeating their clean sweep of the 2-man medals by pushing Christoph Hafer into fourth. Germany won every single luge, bobsleigh and skeleton event bar the women’s monobob in Beijing.

Friedrich created history by becoming the first pilot to defend both his 2-man and 4-man titles as his incredible run of form continued. The 31-year-old only lost one 4-man race this season and now has more 120 top-tier medals across both disciplines, with 84 of them being gold.