Laura Deas and Dom Parsons took the honours in strong skeleton fields in Germany, with Sarah Smith and Arabella Pearson and Lamin Deen and John Baines matching that feat in the bobsleigh competitions.

Deas saw off the challenge of fellow GB Skeleton slider Jor’dan McIntosh to claim gold in a time of 1 minute 57.74 seconds, having clocked the best times on both runs.

McIntosh capped her comeback season following brain surgery with the silver, while Hayley Larcombe took bronze in 2 minutes 2.77 seconds, less than 24 hours after retaining her Inter-Services title on the same track. 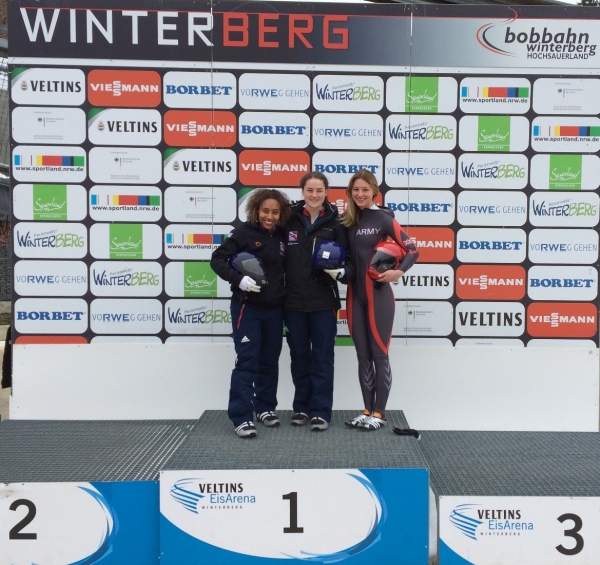 Laura Deas, Jor'dan McIntosh and Hayley Larcombe were 1,2,3 in Winterberg

Parsons, who finished the season fifth in the World Cup rankings, took the British title by 1.35 seconds in a time of 1 minute 54.63 seconds at the venue where he placed seventh at the 2015 World Championships.

Swift and Thomas produced almost identical times for the two other podium places, with Swift finishing in 1.55.987 and Thomas clocking 1.55.994 over the two runs.

Kenny Howard, Jerry Rice and James Howard completed the top six, with Rob Vickerman the top placed non-GB squad member in a time of 1.59.159. Benji Fulker, Scott Pryor and Sam Banda filled the remaining spots in the top ten in an 18-strong field.

Smith and Pearson from the British Army took the Women’s Bobsleigh title before Deen and Baines grabbed the top prize in the men’s competition shortly after.

Deen and Baines, who both raced in Friday’s military competition for the Army and RAF respectively, were clear winners in a time of 1 minute 53.86 seconds after registering two consistent start times and two equally consistent runs overall.