Weston, who is in his first year of competition and only has seven Europa Cup races to his name to date, beat a whole host of more experienced athletes at the home of sliding sports in Switzerland.

The 22-year-old, who previously represented England at Taekwondo, clocked a combined time of 2 minutes 17.33 seconds to finish just four hundredths of a second behind team-mate Marcus Wyatt.

Wyatt placed 11th after jumping two spots from his halfway position of 13th, with Weston slipping back one place from the 12th spot he occupied at the end of Run 1.

Fellow Brit Laurence Bostock came within two tenths of a second of joining Weston and Wyatt in the second run as he just missed out on the top 20 on his own World Cup debut.

20-year-old Bostock finished 23rd overall and became the youngest British male ever to compete on the skeleton World Cup circuit in the process.

The next stop on the World Cup circuit is Sigulda, with the Latvian venue hosting the final round of action in a fortnight’s time.

Thompson, who recorded a career best sixth on the World Cup circuit in Igls earlier this month, has now won medals in three successive ICC races over the last eight days. 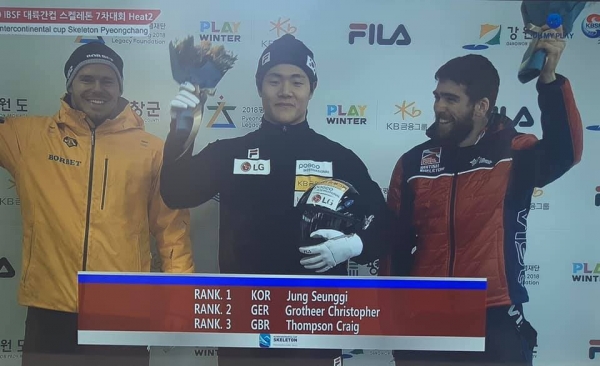 Craig Thompson was among the medals again in PyeongChang

The former footballer won silver and bronze last week in Lake Placid and has now added to that tally in the first of two back-to-back races at the venue of the 2018 Olympic Winter Games in PyeongChang.

Ashleigh Pittaway finished seventh and Stefan Squire 14th, with Amelia Coltman ninth on her first taste of ICC action. Coltman was crowned overall Europa Cup Champion last week and again impressed as she stepped up a circuit in her first year of competitive sliding.

The ICC team race again at 1am GMT on Saturday.