Top ten at Worlds for Wyatt

Marcus Wyatt secured a top ten finish at the Skeleton World Championships in Germany on Friday.

Wyatt jumped up from 13th overnight to better his 12th place from his first global championships in Whistler this time last year.

The former American footballer from Devon twice beat his times from yesterday’s races after recording the fifth and then second fastest starts on his way to the eighth quickest effort in Run 3 and the seventh fastest in Run 4.

World Championship debutant Matt Weston finished 15th as he made a mockery of the fact that he only started sliding competitively in December.

The 22-year-old was 12th overnight before dropping back after his third run but he maintained his position in the final heat of the day to finish above a whole host of far more experienced sliders at one of the most technical tracks on the circuit.

Like Wyatt, Thompson was also among the fastest starters as he achieved his pre-race aim of making the fourth and final heat reserved for the fastest 20 of 32 sleds that began the race on Thursday morning. 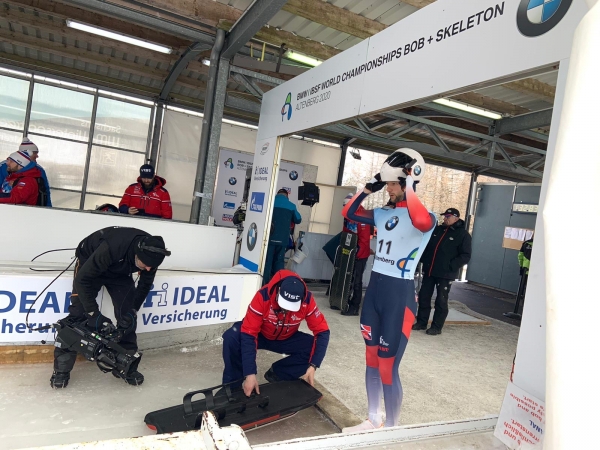 Germany’s Christian Grotheer pipped compatriots Axel Jungk and Alexander Gassner to gold as the home nation became the first team to take a clean sweep of the medals since the Austrians did so in Igls 29 years ago.

Grotheer hadn’t been competing on the World Cup circuit this season but he led after Day 1 and eventually beat Jungk to the title by just two hundredths of a second, with Gassner only a further three hundredths back in third.

Deas was 12th following the first run but a slower time second time around saw her drop five spots, while Smith and Murray endured a tough time in Run 1, leaving them facing an uphill battle from there on in.

Switzerland’s Marina Gilardoni is the surprise leader after clocking the fastest times in both of the first two heats.

Gilardoni, who is competing at her seventh World Championships as a skeleton slider, having previously competed twice as a bobsleigh athlete, holds a huge 0.63 second lead over reigning champion and home favourite Tina Hermann.

Russia’s Elena Nikitina is third as things stand, with Janine Flock and Jacqueline Loelling fourth and fifth but more than a second adrift of Gilardoni.

The women’s race concludes tomorrow at 8.30am GMT, with the first two heats of the 4-man bobsleigh following that afternoon.