McNeill and brakewoman Montell Douglas clocked a combined time of 1 minute 53.82 seconds in the first two runs of the showpiece event of the season in Altenberg.

The final two runs take place from 2.30pm GMT tomorrow, with McNeill and Douglas currently on course for a place on the wider podium.

Maintaining their present position would secure the country’s best result in the women’s competition at the World Championships for eight years.

Paula Jackson (nee Walker) finished seventh with Gillian Cooke in Lake Placid in 2012 but no British sled has been in the top six since Nicola Minichiello won global gold with Cooke at the same American venue in 2009.

Double Olympic Champion Kaillie Humphries leads the field in her first season since switching allegiance from Canada to the United States, with the next three sleds all from the home nation.

McNeill, who is competing at her sixth World Championships, is 35 hundredths of a second behind de Bruin and a further 13 hundredths from the medal spots. 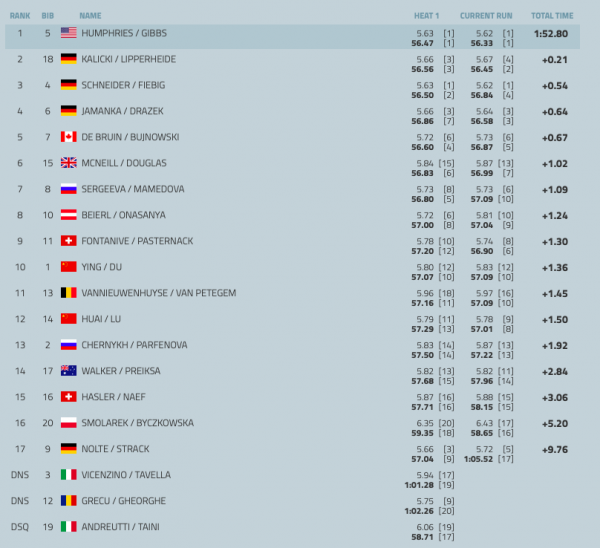 Mica McNeill and Montell Douglas are well placed at halfway

The 26-year-old from County Durham has a previous World Championship best of 12th set last year in Whsitler and in Igls three years earlier.

The race saw four crashes on the opening day, with an Italian and Romanian sled going over in the first run and another Italian sled joining a four-time World Cup medal winner this season, Germany's Laura Nolte, in overturning in Run 2.

The 2-man bobsleigh also takes place in Altenberg tomorrow, with Brad Hall and Greg Cackett and Lamin Deen and Ben Simons going for GB from 10.30am GMT.