Mica McNeill finished eighth in the women’s bobsleigh World Championships on Sunday - her best result in six appearances at the showpiece event of the season.

The result matched her historic efforts from the 2018 Olympic Winter Games in PyeongChang as she came close to a wider podium place in Altenberg, Germany.

McNeill and brakewoman Montell Douglas sat sixth after Day 1 of the two-day race and were on course to record the country’s highest female placing since Nicola Minichiello won global gold with Gillian Cooke in Lake Placid in 2009.

They maintained their grip on sixth position in Run 3 as they closed the gap on Germany’s newly crowned overall World Cup winner Stephanie Schneider in fifth and extended their advantage over Russia’s European Champion Nadezhda Sergeeva in seventh but they eventually dropped back two spots in the final run of the race.

The result comfortably surpassed McNeill’s own previous World Championship best of 12th from Igls in 2016 and Whistler in 2019 and was just one place lower than Paula Walker’s seventh spot in in 2012.

Their overall time of 3 minutes 47.54 seconds saw them finish 22 hundredths of a second ahead of the Austrian sled in ninth and a similar distance behind the Swiss sled in seventh.

Double Olympic Champion Kaillie Humphries won gold in her first season since switching allegiance from Canada to the United States of America. 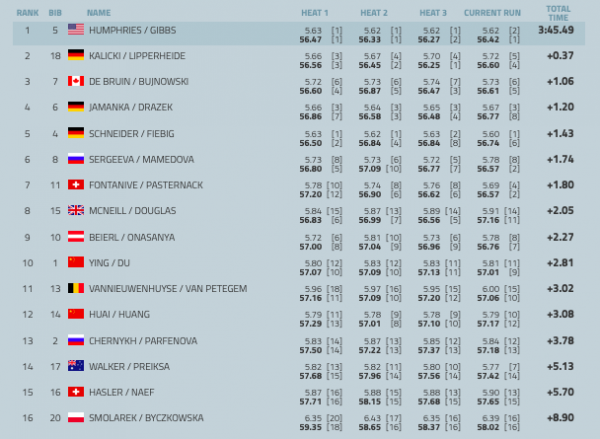