The 41-year-old went one better than last season’s bronze as he finished second over the course of the 10-race season.

Mapp won four golds and five medals in all since the season started in December as he cemented his place as one of the leading lights in a sport that is growing in popularity every year despite missing out on a place at the Beijing Paralympics.

He headed into the final weekend of racing with a slender lead at the top of the standings but his great rival and good friend, Lonnie Bissonnette, from Canada eventually pipped him to the title.

Mapp, who won the overall crown in 2017/18, recorded his lowest placings of the year in Park City as he finished 10th and then 13th on a track that has never been among his favourites. Bissonnette took gold and silver in the double header in Utah but Mapp’s incredible performances in his first seven races of the season saw him comfortably win overall silver. 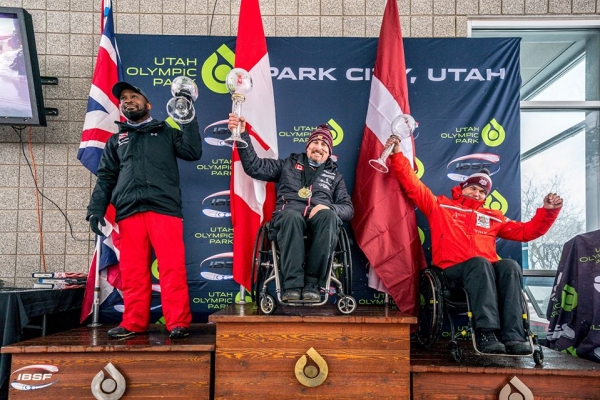 A Double amputee after being injured on active duty when his military vehicle ran over an explosive device in Afghanistan in 2010, Mapp won races in Lillehhamer, Oberhof (twice) and St Moritz and was second in Lillehammer, fourth in Moritz and fourth and seventh in Lake Placid before the final two races in Park City.

He now turns his attentions to the World Championships, which take place in Lillehammer on March 24 and 25. Swindon-based Mapp is the reigning European Champion and won silver in last year’s World Championships in Lake Placid and bronze two year earlier in St Moritz.