Deas, who was part of a history making British Skeleton team in South Korea 12 months ago, saved her season’s best ‘til last in the final World Cup race of the campaign in Calgary.

With the World Championships in Whistler less than two weeks away, the 30-year-old sat seventh after the first run but produced the joint quickest time in Run 2 to medal for the first time on the World Cup circuit for more than three years.

"I'm really chuffed with today's bronze. It’s great to be back on a podium - it’s what I’m always aiming for and it’s a pretty special feeling,” said Deas, who won World Cup silver at the same track in 2014 but hadn’t been on the podium since winning bronze in Lake Placid in January 2016.

“It's been quite a disrupted season for me, missing two races and lots of ice time due to illness and injury, so I'm really pleased to be finding some form as I head towards the Worlds.

“We've been up against it here this week with only one day of training before a double race (Calgary also hosted the rescheduled Konigssee race that had been cancelled because of the weather last month), but the whole team has pulled together really well to put in some strong performances.

“The last time I raced here was four years ago, so I just had to try and get everything I could out of the training day and put down the best runs I could in the race. I did that in the second run and I’m really pleased to end the World Cup on a high.” 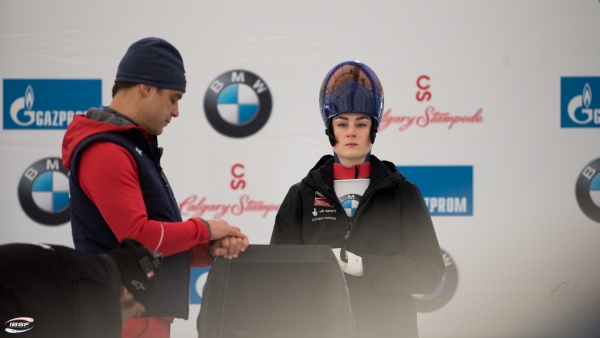 Deas placed sixth in the first of the two back-to-back races in Calgary less than 24 hours earlier, with Kim Murray producing a personal best of seventh on Friday.

Madelaine Smith was 10th on Friday and 13th on Saturday, with Ashleigh Pittaway 16th in the second race.

Marcus Wyatt led the way for the British men on Friday with an eighth-placed finish as Jerry Rice and Jack Thomas came 15th and 18th respectively.

The British Skeleton team for the World Championships will be named early next week, with the skeleton races scheduled for Thursday 7th and Friday 8th March.